Reading over Falen's top ten music list has inspired me to have a go myself, even though I really need 7 or 8 or 10 different genre lists to put all my favorites down.  So this list will be more...representative, shall we say.

Let me just say first that my "taste in music" is....eclectic to say the least.  There are, I think, several reasons for this--but the main one is early exposure to a wide variety of musical styles.  My parents liked (and owned) classical music...and jazz and swing...and popular music of the 50's, 60's and 70's, the music they grew up with.  We had a lot of that on 8-track:-))  The other main reason this list will seem mixed up to some people is that I have both some musical training (flute), and some dance training (a little ballet, jazz, tap, ball room--and I just generally like to shake my booty.  Especially when nobody's home...)

In no particular order:

Billie Holiday, Summertime (also I'll Be Seeing You, and... ain't nobody sing like The Lady!)

James Galway, Greensleeves  (I play flute--and he came to my university when I was a freshman.  He is jaw-droppingly good-- an amazing and funny performer. At one point during the performance he pulled a tin whistle out of his pocket and began to play...and suddenly there stood before us not a world-famous flautist wearing a tuxedo, but a little boy who loved to play.  He shares something very special with the audience when he does that)

Simon & Garfunkel, Cecilia (my husband likes this one,too--and our daughter is named after it;-)  I grew up with this...on 8-track.  Also, you can dance to it.

Sibelius, 2nd Symphony, Finale  (I played this in high school--it still makes me feel like I'm being lifted straight to heaven.  It was an intense musical experience--and our orchestra placed first in state competition with it.  I am profoundly grateful that our director chose it--that he chose difficult music and challenged us to play it.  We seldom played versions arranged for high school players.)


Dave Brubeck Take 5 (My dad had this album--the original, which I listened to over and over.  And appreciated even more when I got to high school and understood that this piece is not in standard 4/4)

REM, Radio Free Europe (college music--the stuff your boyfriend introduces you to.  I saw REM in Hamburg, in a pub with no more than 300 people.  My friend and I listened to them perform this song--she and I sat on their instrument cases:-))

Puccini, O Mio Babbino Caro  (this makes me wish I'd had voice instruction at some point in my life, so that I, too, could sing like angels in the shower.  Yes, angels take showers, too--and this is what they sing!)

Young MC, Bust a Move (this makes my butt go--and the rhyming!  Is he the second incarnation of Edward Lear?  Call me a philistine if you must, but...yeah, I see you there, bustin' a move in your bedroom;-))

Ray Charles, Georgia On My Mind (this song makes me homesick--it could be the national anthem, except everybody in the other 49 states would complain. But I wouldn't, even though I'm from Indiana--I know he meant it for everybody).

Coventry Carol (the only time we ever had music on playing in the background was at Christmas.  I love Christmas music, and this is my favorite one--medieval and haunting, and I love to listen to it sung in a cavernous cathedral)

So--what do you sing in the shower to?  Shake your booty all by yourself in your bedroom to?  Fly up to heaven with?  Do tell!  Another time, I'll put up a list of Japanese songs I like:-))

(Again, note that this is by no means an exhaustive list--ask me next week, and you'll see The Supremes, Frank Sinatra, Teleman woodwind quartets, Johnny Cash, The Carpenters, Ella Fiztgerald, The Nutcracker Suite, En Vogue, Mozart, and Madonna...)

Email ThisBlogThis!Share to TwitterShare to FacebookShare to Pinterest
Labels: music

yokohamamama
yokohama, kanagawa, Japan
an american mom married to a japanese guy writing about mom-ing, playing, education, science, cooking, and occasionally anything else that seemingly has nothing to do with the aforementioned... 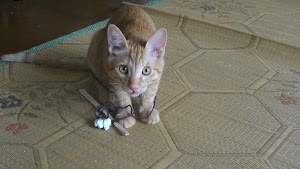 Why I Write Field Notes

What is this life if, full of care,
We have no time to stand and stare?

No time to stand beneath the boughs,
And stare as long as sheep and cows.

No time to see, when woods we pass,
Where squirrels hide their nuts in grass.

No time to see, in broad daylight,
Streams full of stars, like skies at night.

No time to turn at Beauty's glance,
And watch her feet, how they can dance.

No time to wait till her mouth can
Enrich that smile her eyes began?

A poor life this if, full of care,
We have no time to stand and stare.
—W H Davies.

I realize that I sprinkle my writing with a fair number of Japanese expressions. It has just occurred to me that I might very well provide a glossary for those of my readers who don't speak Japanese (osokute, sumimasen!= please excuse it's being late!)

I'll add more phrases as I think of them/use them!